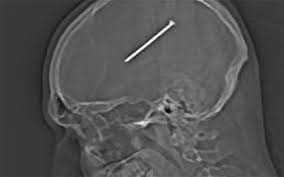 When Miss Crankypants lamented that some idiots blew up the Boston Marathon, a Texas fertilizer plant exploded and one of her favorite writing students suddenly has brain cancer, the pain was almost too great to bear. She couldn’t think of a single humorous thing to say. But now the student is fighting back, and to prove he’s a brave writer, just had brain surgery: all while AWAKE!
To Miss CP, this is the equivalent of hiking the back country of Alaska, photographing brown mama bears, brown cubs and really irritable daddy browns from a few feet away and living to tell about it and practice law. But now that our darling Boy Scout is out of surgery and ready to tackle the really crummy one-two punch of chemo/radiation, his wife is asking for jokes.
Miss Cranky specializes in jokes! She’s absolutely giddy and has been googling brain jokes all morning. Her findings so far? 1) Almost every brain joke she’s found is from a guy and 2) most are not repeatable in polite company. Woody Allen claims that his second favorite organ is his brain. Robin Williams makes a comparison between these same two organs, lamenting that God didn’t give men the blood supply to run  both at the same time. Do you see a pattern here?
If women ran the brain jokes, they’d at least be halfway clean!
Miss Crankypants ought to have a yard sale: She’d invite everyone who needs a better brain to come on down and browse the selection of BOY BOOGER BRAINS she’s been keeping in her basement all these years:
The Toddler Brain: Only says NO! Loves to poke things up nose and laughs uncontrollably at the mention of  pee, poo, belly button lint or snot.
The Tween Brain: Insists on jumping off the roof. Visits ER so often they know him by first name.Wears his underwear on his head, ties his bathrobe sash to a broom handle and fishes  off the side of the bed (true story!).
Teen Brain: Only says: You’re not the boss of me! and What? from hearing loss listening to iPod at 900 decibels. Eats anything, preferably from the Cheeto food group. Needs new shoes approximately once every 12 hours.
Adult Brain: Only says NO! Especially when asked to empty trash or mow lawn. Laughs if you mention pee, poo, belly button lint or snot. Especially snot.

So there you have it, people. Oh, and if the BOY BOOGER BRAIN becomes a lawyer and loses his brain, don’t worry. They’re spendy, but you can get used lawyer brains on eBay. Why are they spendy? According to the Brain Joke, it’s because they’ve hardly been used! Feel Better, dear Boy Scout! And don’t forget: Laughter really is the best medicine.

4 comments on “Brain Jokes for a Boy Scout”